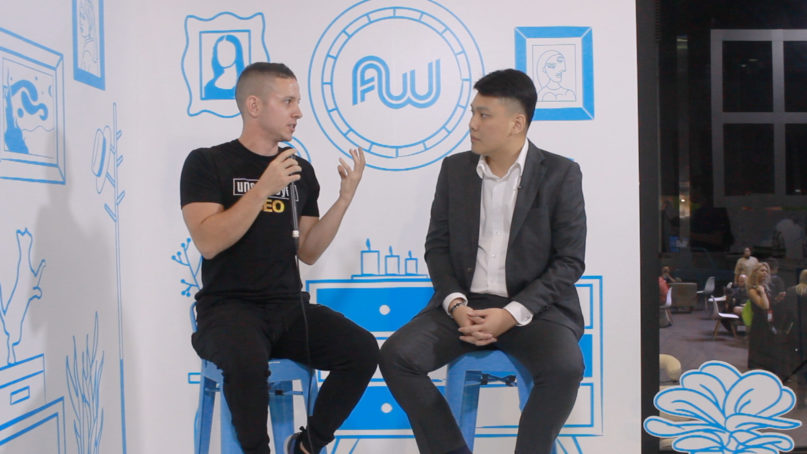 Kevin David:
Hey everyone! My name is Kevin David. Just finished my speech here at AWA. It was incredible! I’m from Eugene, Oregon originally, but now I live in California, sunny, beautiful California. This is my second time in Bangkok actually. I love it here.

I used to be an 80-hour a week accountant and then I used ecommerce, I used digital marketing, I used what I learned with affiliate marketing to kind of free myself from that corporate grind. And then I dedicated my whole life and everything that I do, every single day, to helping as many people as I possibly can escape that 9-5 trap of the cubicle and actually go on to live the life that they want.

Benjamin Yong:
?️ So our audience actually, they have some questions. Do you recommend 100 ad sets per product for ecommerce?
Kevin David:
That’s probably overkill. But realistically, $250 a day, which is 100 ad sets x $2.50 per ad set? $250 a day is not that much money. So even if you’re spending $250 a day on ecommerce, what that’s gonna allow you to do is just get results faster. You could do 10 ad sets a day but it’s gonna take you 10 days. Or you could do 100 ad sets a day and it’s gonna take you 3 days and you’re have your proven winners. So it’s just faster.

Benjamin Yong:
?️ There’s always been this saying where, when you create different ad sets on Facebook, you’re actually getting different groups of audience. So what would be the ideal amount of ad sets that you would recommend to our audience?
Kevin David:
I mean, 100 ad sets. If you can do it the lazy, easy way, which is just images, like if you make some really sleek, 3D-rendered, beautiful images, you don’t even need to go crazy and create videos. And even if you do create videos, all you need is a basic video that has the ability to go viral. It appeals to emotion, it’s funny, it has one of those things. 6 images, 1 video.

Benjamin Yong:
?️ Right. That’s definitely a very interesting method that you have over there. Any third-party Facebook ads tools that you use to manage large amounts of ad sets?
Kevin David:
No. So what I was showing was how to use automation rules. You don’t need to have external tools. You can use automation rules inside of Facebook. People just don’t know it exists. Everyone’s looking for that little hack but Facebook has it all available for you. People just don’t know how to do it. So all you have to do is use the Create Multiple Ad sets, like I showed, and you just use automation rules to govern all of your different ad sets based on the criteria that you set.
Benjamin Yong:
?️ Okay. So let’s say if there are certain rules that you would strongly recommend anyone to do, what would be the rules?
Kevin David:
Yeah so there’s three rules right. What I do is, if an ad set has a positive ROAS, a positive return on ad spend, of 1 over 1, I scale that ad by 21% every 3 days.
Benjamin Yong:
?️ Every 3 days. Why 21%?
Kevin David:
You can’t just scale something by 1000%. You just won’t spent the same. You’ll get penalised. You won’t have the same results. You won’t have profitable ad sets. What I’ve found through a lot of testing is the most you can scale is about 20% a day. And I figure that the smartest people who’ve learned that are doing it by 20%. So I’m doing it by 21% to try to be one step ahead of them.

Criteria For Turning Off Ad Sets

Benjamin Yong:
?️ Okay. By the way, guys, this is gold. So what would be the second?
Kevin David:
So the second is how I turn things off. Since I’m running $2.50 a day per ad set, what I do is I set an automation rule that turns off all active ad sets if they meet two criteria. The first criteria is if they spent more than $7.50. So they’ve been running for 3 days. 3 days of $2.50 a day. If they spent $7.50, and if they have less than one lead.
It depends on what your business is. Maybe it’s less than one purchase, maybe it’s less than one lead, depending on how high ticket what you’re selling is. I know my funnel and I know that if I can get a lead for under $7.50, then it’s worth spending that money because I trust my funnel so well. But everyone has to know their own business. If it’s an ecommerce product, maybe it’s gonna be different depending on how high ticket it is, blah blah blah. 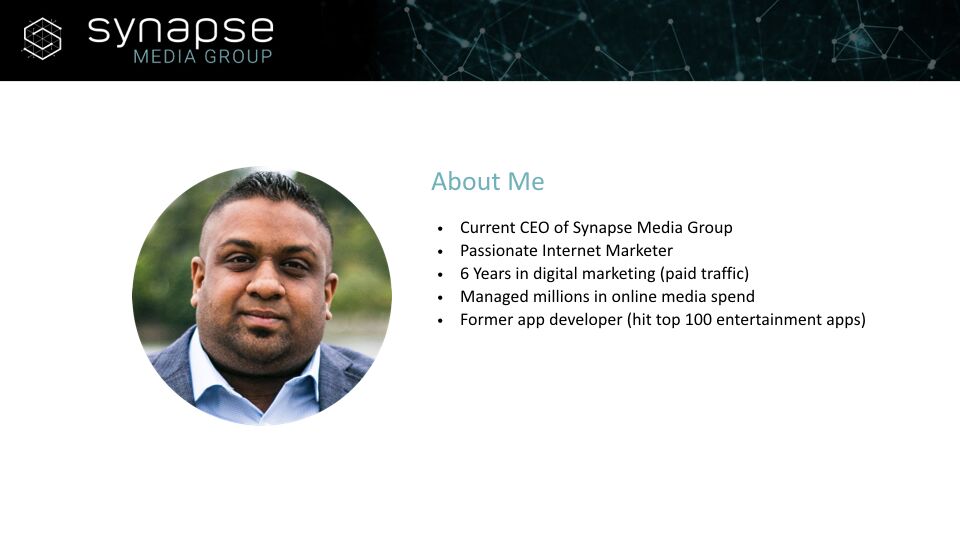 Benjamin Yong:
?️ How do you deal with customer support and response and payment gateways?
Kevin David:
That’s a big question. So customer support, I find virtual assistants on Upwork. I found that the Philippines has the smartest people with the best price. Generally like $3-5 per hour. You’re from the Philippines? Yeah so that’s what I do there.

For returns, so for my particular business it depends because for Amazon, Amazon handles returns. They just credit your account. It’s all very easy. For my courses, people email in if they wanna refund. If they meet a variety of criteria, like if it’s less than 14 days and they viewed less than 40% of the content, then we give them a refund. But if they’re outside that then we don’t.

The payment gateway, I used Stripe originally but Stripe is incredibly strict about the 1% charge-back ratio. And with high ticket, it’s very, very difficult to meet that because of fraud and XYZ. So now I expanded into using a couple other things. Elavon is one of the payment gateways that I use, which is a very advantageous gateway. But again, it’s not worth doing that unless you’re making $500,000 a month, and unless you’re selling high ticket. If you’re running a small ecommerce business, just use Stripe.

Benjamin Yong:
?️ I see. That’s good to know. Micro split testing of affinity scores sounds sick, but how can I relate to verticals like finance?
Kevin David:
Yeah. So it’s the exact same thing, right? I’m gonna make an assumption here because I don’t know what they mean by finance. That’s obviously a very vague statement. But like finance for example, let’s say it’s like a finance blog or something. What I would do is I would look at Bloomberg or whatever, the most popular finance blog that’s available to target as an interest in Facebook, and then I would just plug that into Audience Insights. I would see what other pages have the highest affinity or are most similar to the thing that I chose, like Bloomberg Finance for example. And I would run micro split test on all of those other pages that are most similar to Bloomberg Finance.
Benjamin Yong:
?️ Okay. And do you also split test or recommend others to split test the interests and everything, like what you showed on stage?
Kevin David:
Absolutely. Anyone who’s not doing that, you’re losing and allowing your competition to win.
Benjamin Yong:
?️ Okay, that’s good to know. What’s the best way to run clickbank offers on Facebook without getting banned?
Kevin David:
I mean, the answer? Nobody likes hearing this but it’s a bridge page. Bridge pages just add a layer of complexity. But bridge pages, if you use them correctly, work really well because you can pixel people, you can build an email list and you can start to retarget them. Or you can run traffic. You can do Messenger opt-ins.

What you can do is either add a bridge page if you’re using websites, pixel them, build an email list. Or run the CTA as Send to Messenger, and then they actually get a message on their phone, and when they click it, they go to the affiliate link.

Benjamin Yong:
?️ I see. So instead of marketing the affiliate link directly on Facebook, you try to just put another funnel in between so that these people go through that before they are being shown the affiliate offer.
Kevin David:
Exactly, yeah. Facebook allows you to do that and so you run a much lower chance of having your account banned.

Benjamin Yong:
?️ Okay so your last question. So for anyone that’s new and want to get into this game, what would be the one advice that you will give to them?
Kevin David:
Go subscribe to kevindavid on Youtube! I’m just kidding. No, the number one advice I would give, honestly, is you have to just do stuff. Everyone gets so overwhelmed and they’re like “Shopify! Crypto! Affiliate Marketing!” They’re all like, “Aaah, there’s so many different choices!” And they end up doing nothing.

Do the research, see who’s killing it, look through all the facades and illusions and lies. See who’s actually making the most money with the least effort and then dedicate yourself to that long enough to actually produce results. A lot of people try Shopify for a week, not get results, move on. Try Amazon for a week, not get results, move on. And then they’re like, “This entrepreneur stuff doesn’t work!” It took me a year to get it to work, and then it exploded. So you just have to do stuff, first of all, and then you have to give yourself enough time for it to actually work. 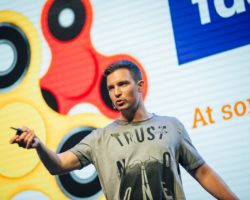 E-commerce has been a scorching hot vertical, grabbing a huge amount of interest over the recent…read more
07 Dec • AWC 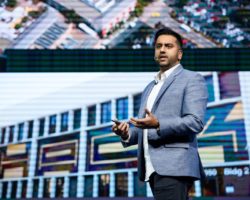 Launching and scaling a business into the multi-millions requires planning, confidence and a fair amount of…read more
06 Dec • AWC 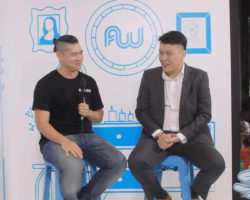 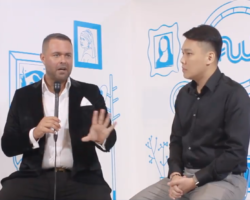