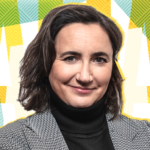 Amaya is the CEO of LOLA MullenLowe Spain. She was elevated to the role after three years as head of planning and strategy in Madrid where her team made significant contributions to business growth and reputation in addition to winning numerous Gold Effies. LOLA is currently the #1 ranked agency in Europe and 4th in the world in the 2019 WARC report which tallies accolades from creative, media, and effectiveness across the globe. LOLA has also been named as the best agency to work, under her leadership.

Amaya joined LOLA in 2006 as part of the founding team and has led the planning and strategy department for some of world’s greatest brands that include: Unilever’s Magnum, Cornetto, Signal, and Rexona; Heineken, Burger King, San Miguel, Bimbo, Pescanova, and Cabify.